Pro2col MFT experts take to the hot seat as they predict their 2022 managed file transfer (MFT) trends for the year ahead.

This includes projections on the MFT marketplace, GoAnywhere MFT and important IT trends to look out for.

2. A look at the year ahead for GoAnywhere MFT– Richard Auger, Senior Technical Consultant

What’s in store for the MFT Marketplace 2022? 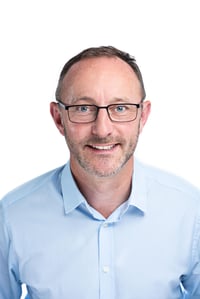 James founded Pro2col in 2004, to provide independent, specialist consultancy in secure managed file transfer, automation and system integration. He’s a self-confessed file transfer geek, and is continually reviewing the technologies and marketplace to provide the best possible advice to organisations.

Sitting here whilst penning my ‘state of the market’ analysis post, reflecting upon the past and potential future trends it strikes me that I’ve finally ‘come of age’.  This February I will officially have been working in the file transfer industry for twenty-one years and Pro2col will be eighteen years old too. I’m not entirely sure where all that time went but I’m sure some sort of celebration is in order!

Over the past twenty-one years, I’ve seen a significant amount of specialisation by software vendors as they niche down to solve specific problems. It’s something I’ll cover off in a post later in the year but in the basic principles of moving files around securely are nothing new. Many file transfer platforms have existed for two decades or more, which makes the rate that ‘file transfer vendors’ are being acquired at, all the more interesting.

In recent years we saw Progress acquire Ipswitch, and HelpSystems acquire Globalscape, both for in excess of $200m. JSCAPE was acquired at the beginning of the 2021 by Advanced Systems Concepts, and I recently noticed that another workload automation vendor, SMA Technologies had acquired ROBO FTP, who aren’t quite the same stature of the previously mentioned vendors but it is interesting to see that there is an increasing appetite for the addition of managed file transfer capabilities to the portfolio for larger software vendors. I actively monitor the whole of the managed file transfer marketplace and the pool of software vendors continues to shrink year by year. What we’ve seen consequently is higher prices across the board, including some of lesser-known vendors too.

One thing that I’ve called out before and still surprises me is we’ve not seen an acquisition of one of the larger MFT vendors by an iPaaS vendor. The natural synergy between the two technologies and the mature, large user base offered by many MFT vendors, I thought would be too tempting. I’m sure we’ll see some more consolidations over the coming year but there aren’t that many acquisition targets left. Maybe we’ll see an MFT vendor step into the iPaaS space.

The move to cloud has further gathered pace so far this year. Whilst we don’t have our final revenue numbers, I can be sure that our jump to 18% of total revenue seen last financial year will be surpassed by this. I wouldn’t be surprised if when we wrapped up our financial year at the end of March, we have jumped to around 30% of all revenues.

Nevertheless, the continuing transition to MFTaaS has not been without its challenges. Prospective customers are currently caught between traditional MFT software vendors finding their way with cloud, whilst cloud-first MFT vendors are playing catch up in building out their automation capabilities. I expect both parties will get there over the coming 24 months, but by then will iPaaS or the big Cloud vendors already have filled the gap? I reviewed Microsoft’s Azure SFTP server offering in November, which came up short in capabilities but they’re off the mark and I’d be surprised if we didn’t see further enhancements.

An area that I think we can be confident of much great adoption coming into 2022, is the enhanced security posture offered to managed file transfer by ICAP. The definitive communications protocol for integration managed file transfer with anti-virus and data leak prevention, ICAP ensures data coming into the organisation is virus checked and that leaving doesn’t contain commercially sensitive data. For far too long file transfer has, to coin a phrase of a former colleague, “driven a coach and horses through an organisation’s information security policy”.

This past year we’ve seen an increasing number of our largest projects centred around migrating processes from disparate file transfer solutions or home-grown scripts to a common, modern platform.  The benefits being a single platform to support, in many cases a lower total cost of ownership and significantly enhanced visibility of transfers into, around and out of the organisation.

An area we’ll be looking to expand our capabilities in the coming year is that of providing further visibility to internal file transfers, those that haven’t traversed a managed file transfer platform. It’s something I’m actively working on and hope to be able to introduce you to later in the year.

A look at the year ahead for GoAnywhere MFT 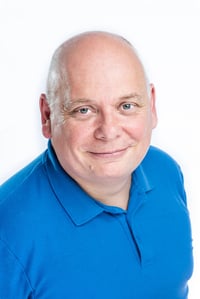 Richard is a senior technical consultant specialising in MFT. He delivers installations, support, training and other professional services to help businesses maximise ROI on this technology. Richard works with organisations in financial services, banking, healthcare and more.

Over the Christmas period I found myself thinking about what 2022 would look like for some of our vendors products.  HelpSystems GoAnywhere has always been a very dynamic product with a forward thinking portfolio, so I thought I would perhaps gaze into my crystal ball and predict the best of what we have to look forward to in the new year.

GoAnywhere SaaS: Improvements to both performance and usability

I’ll start with Cloud but looking at it from two angles.  First of all, I can foresee further improvements in the way that the GoAnywhere SaaS offering looks in both performance and usability.  I foresee greater security granularity and reporting in the management console, allowing for access to be set at a user level, instead of one size fits all (not everyone should have the access to restart the service!).  The admin GUI may receive a bit of a refresh, having gone for a few years without changing.  The scalability options will also become more granular to accommodate faster change to meet new requirements.

I also look forward to more emphasis on containers, especially given the trend now for architects to plan a more dynamic cloud based environment.  Perhaps the range of containers will be extended from just docker to Kubernetes and similar.

Agents are fast becoming a staple part of any installation, especially when considered with a  cloud offering of MFT (SaaS or self-hosted).  Agents give a secure portal into a network from a server outside the network.  GoAnywhere agents will almost certainly receive some functional updates that will allow them to interact with even more systems than they do already, but other features (syslog, icap, gacmd) would all be useful.

It has probably not escaped your notice that HelpSystems has been investing heavily in security software.  There is already a pretty clear process to make ICAP calls from GoAnywhere into Clearswift, this will most likely become even easier and potentially more secure as Clearswift will almost certainly introduce ICAPS rather than just ICAP (so your files can be securely sent outside the network to a remote ICAP server).  We haven’t yet seen anything on how Titus/Boldon James will be connected into GoAnywhere, at an absolute minimum I would expect there to be a cloud connector for this on the way.  Finally, GoFast will finally disappear, only to be replaced by File Catalyst.  Again, I would expect the integration between the two to arrive during 2022 (presumably in the first half).

Three important IT trends for 2022 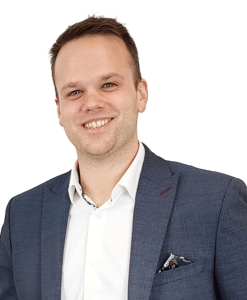 Chris is a technical director with years of experience in the managed file transfer and information security industry. He strives to deliver the best product, support and training to customers, often building relationships that last past project delivery.

It is unlikely to come as any surprise to anyone that remote and hybrid working practices are going to continue to be disruptive to both traditional working patterns and IT teams in 2022. In particular, IT teams are going to have to become increasingly conscious about how they provide access to critical applications and data in an “anywhere/anytime” -access oriented workforce, while balancing the needs of other areas such as security.

With huge amounts of legacy applications out there and those which are just not suited to a world outside the walls of their network boundaries, IT teams will be looking at how best to adopt application gateways, VPNs or even migrate to more modern applications, often hosted in cloud environments.

Not quite a groundbreaking prediction, however where remote and hybrid working practices were seen as somewhat temporarily tolerable in 2021, they are now becoming normalised and IT teams will be looking at how they turn what was a sticky plaster response into something which keeps their remote workers operationally efficient, while meeting the expectations of security, compliance and management.

While this has been building for some time, hacks such as those which affected SolarWind’s Orion solution and the more recent log4j debacle have realigned focus not just on in-house security and vulnerabilities, but those inherited by supplier solutions.

In 2022, we should expect to see increased scrutiny into how solutions are developed, their dependencies and components are maintained to minimise risk. Expect much longer and in-depth procurement processes which will want to understand whether software has been third-party audited and if its development has involved product security throughout.

Automation to be Key in Solving Recruitment Issues

Throughout 2021 we have been witness to a increase in difficulties for recruitment in IT roles. Prior to 2021 there was a tangible skills gap, however with the pandemic having shifted many workers from one career path to another, today it is harder than ever to find those capable to fill the mountain of IT vacancies.

While there is no immediate resolution on the horizon, many IT leaders will be looking to automate and streamline their departments to account for these gaps. This takes many forms, from automated file and data workflows; to automated network monitoring and diagnostic; and even automated security response software which alters the configuration of network devices and firewalls when threats present themselves.

Spaces within IT operations which can be automated means that IT staff can be shifted to those are areas which need a human pair of hands, thus helping to resolve some of the short-term pain being suffered in the employment. 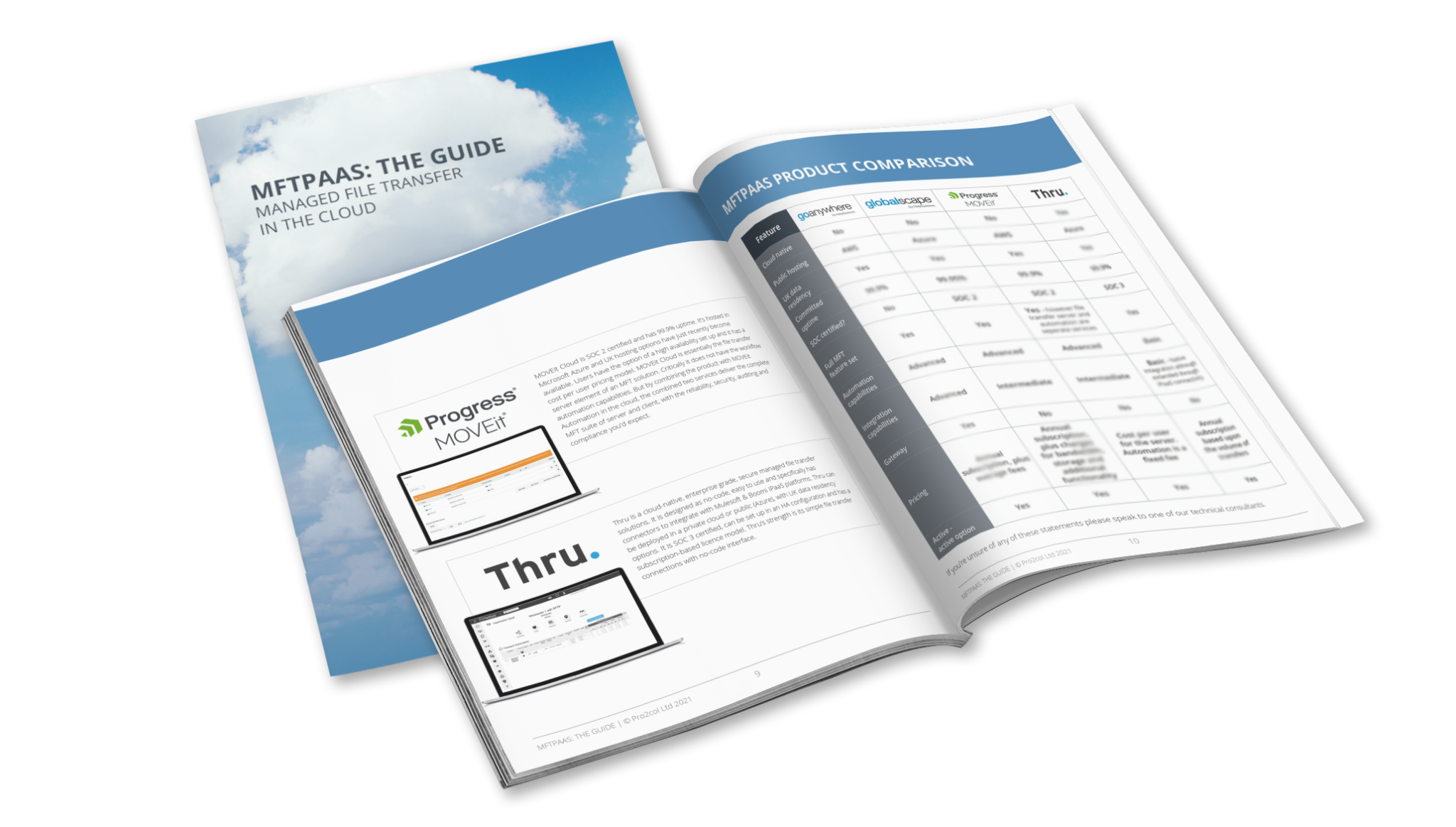 Managed File Transfer in the Cloud

When is the right rime to move to a cloud-based MFT infrastructure?
This guide considers the opportunities and risks, plus a featured comparison of the leading products.